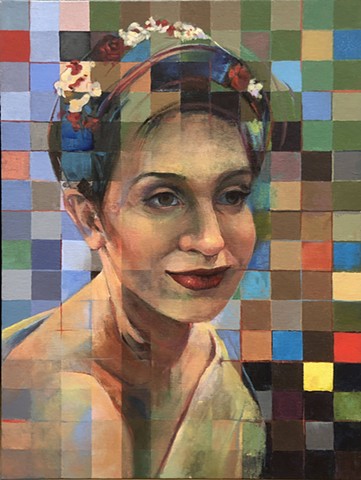 This is a painting of a fictional character that invented after reading a story about someone's grandmother who was an Irish Immigrant. I constructed her face from memory, and it is a composite of several other faces I have painted in the past. Her portrait is juxtaposed with a gridded background. I didn't use the grid for proportional accuracy. Instead, it is used to abstract the figure. The linear quality of the grid breaks up the positive and negative space. Some areas of emphasis, her eyes, for instance, push forward, while other areas such as her neck and hat recede into the grid. It's an experiment that I have been playing with and would like to dig deeper into this concept.