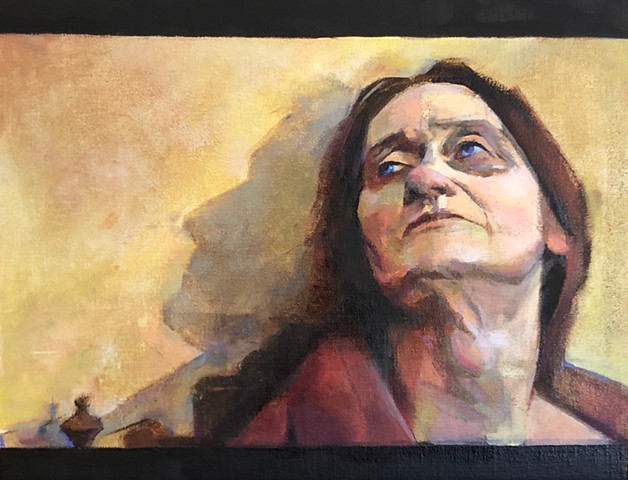 This image was painted from a film still of Andres Sokorov's film 1997, "Mother and Son." The dreamlike quality of light that he captured inspired me to make the painting. The loose narrative of the film is about a son who cares for his dying mother.

"Her son combs her hair, feeds her, covers her with a coat, and takes her in his arms. She is totally dependent on him as he himself was once totally dependent on her. As the film progresses, the son carries his mother on a long journey from her sickbed to her deathbed. It is a circular motion which travels a long walk through a dreamlike landscape in the countryside, along winding dirt roads. At each of their brief stops on the journey is a moment of contemplation, caresses, and tender murmurs. These soft murmurs tell of the mother's love for her son when she was nurturing him and of the son's love for his mother as he opens for her the mysterious path to her death. They progress under the leaden and luminous sky of the Baltic, in totally isolated landscapes. From time to time, there is a far away train or a sail on the sea, emphasizing further their isolation from the rest of the world."